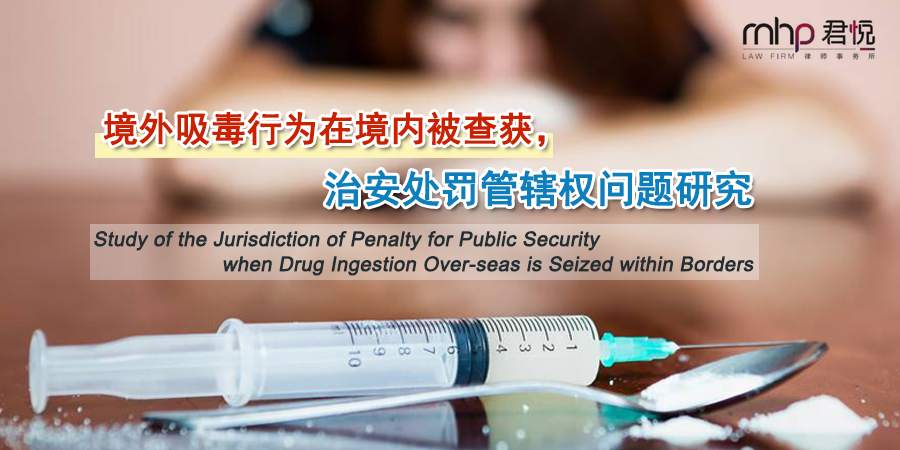 Drug ingestion is an illegal act in People’s Republic of China. According to Article 72 of the Law of the People’s Republic of China on Administrative Penalties for Public Security, a person who committing acts of ingesting or injecting narcotic drugs shall be fined or be detained. At the same time, following Article 10 of this law, to a foreigner who acts against the administration of public security, leaving the country within a time limit or deportation attached to a penalty may be applicable.

This indicates that even though a foreigner is only fined and not detained for ingesting drugs, he/she will face high risks of deportation.

In the city of Shanghai,  the comprehension and application of Article 10 by Public Security Agency has an obvious trend of becoming strict during these days. Once foreigners get penalties for drug ingestion, they all will be applied to attached deportation in principle.

The article would like to discuss whether Chinese police could apply security penalty to the actor when the act of ingesting drugs occurred overseas, and was seized by the Public Security Agency after entering the border.

Take a real case as an example. Citizen D from Country A, who holds Chinese Work Visa,  lives and works in Shanghai. One day in March 2019, the person was tested positive for cocaine through hair detection at a Shanghai police station. D stated to the Public Security Agency that he/she ingested narcotic drugs - cocaine - in Country A during the Christmas of 2018, but did not have any ingestion or injection acts in China. According to the expert conclusion of positive symptom in hair detection and D’s statement about drug ingestion acts, Public Security Agency made a decision of security penalty for fining 500 RMB and applying attached deportation.

Since D’s career development and social circle are both within China, there will be profound consequences to his/her life when being applied to deportation. Now D has already fully entrusted author’s legal team, filed an administrative lawsuit to relative court, aimed for the court to cancel the security penalty from Public Security Agency. Thus the deportation measure will lose its legal basis.

Before the court making a final judgement, author will briefly analyze several controversial law and evidence issues involved in this case:

I. What can be illustrated from the conclusion of positive hair detection?

The access of drug into urine is a process of persistent metabolism and rapid degradation, and the trail of taking drugs can be vanished within several days. Therefore, through urine test, it is only capable of detecting whether the actor ingested drugs during a short time period (usually no longer than 3 days).

However, after narcotic drug enters human body, it will be led by blood circulation and move into hair follicle. Its prototype and metabolite will be fixed by cornifin in hair and steadily reserved. The retroactive period of hair detection could be up to 6 months.

In other words, when the result of hair detection is positive, it can prove that the actor ingested drugs during the past 6 months, but it is inaccurate to verify a certain date or period of drug ingestion within these 6 months.

2. Is smoking or injecting drugs a specific action or a persistent state?

To start with, we have to distinguish between two confusing concepts: drug ingestion and drug addiction.

According to the Measures for determining drug addiction issued jointly by the Ministry of Public Security and Health Department, drug addiction is a persistent state that human body contains drug substances.

The penalty object of the Law of the People's Republic of China on Administrative Penalties for Public Security should be a movement or action conducted by the person that violates the aforementioned law, instead of a persistent state that the person has.

However, in the law enforcement practice of the Ministry of Public Security, as long as the hair or urine test results are positive, penalties for public security would be carried out even if the Ministry of Public Security failed to prove the drug ingestion behavior by existing evidence. This is an incorrect of applying drug ingestion to drug addiction.

3. Does the domestic police have jurisdiction over drug injections that occur outside the country?

In other words, if the acts that are committed against the administration of public security outside the territory of the People’s Republic of China, the law would be no longer applicable, thus the Chinese police have no jurisdiction to make a public security decision on the person.

In this case, if the existing evidence is insufficient to prove that D’s drug ingestion occurred within the territory of the People's Republic of China, then Chinese police would not have the jurisdiction over this case.

4. Could existing evidence prove which country the drug injection happened in?

The evidence that could prove D’s injection happened in the territory of Country A are:

1. The testimony of D staying in Country A during the Christmas Holiday

2. The entry and exit records on D’s passport and the flight ticket information prove that D was indeed in Country A at Christmas.

3. The positive conclusion of the hair test was made in March 2019, and the Christmas in 2018 was December 25, therefore the interval is within the range covered by the 6-month retrospective period. The testimony of D is thus confirmed.

In summary, the author believes that the if the drug ingestions occur outside the country and are caught in China, law enforcement agencies should not simply use the drug detection results to disguise the lack of jurisdiction, and use drug addiction to conceal the missing evidence that proves the action of drug ingestion. Instead, evidence and legal facts should be paid full attention, and the decisions of penalties of public security should be made prudently.